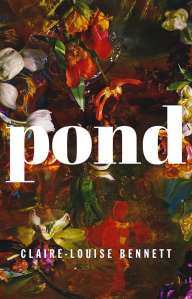 A few weeks ago, while in the middle of Claire-Louise Bennett’s debut novel Pond, I discovered an interesting quote on the paper tag attached to my bag of chamomile tea — a great venue if you’re looking for cheery aphorisms, but rarely a space for particularly thought-provoking material. This particular tag featured a quote from Lord Byron, which read, simply: “There is pleasure in the pathless woods.”

Under normal circumstances I would have ignored this little snippet from Byron, but I had been grappling for the last week and a half with Bennett’s novel; a beautifully precise but sometimes dodgy book that looks you in the face for only seconds at a time before skirting off in some strange, tangential direction, leaving you to make sense of any philosophical or emotional discoveries alone. This book, I thought, is a pathless wood — an unmarked, looping, roundabout path through the life of a narrator whose name you never discover, but whose complicated inner workings unfold before you so that at the end of the novel you feel calmer, more vulnerable, more real.

In shortest terms, Bennett’s novel is about the mundane daily life of a young, misanthropic woman living in a cottage on the outskirts of a small town. More broadly, the book grapples with communication and desire, fear and longing, loneliness and solitary pleasures. It is a book of particulars — in the chapter titled “Morning, Noon and Night” the narrator spends pages discussing the appropriate arrangement of fruit in a bowl on the windowsill. What makes Pond remarkable, though, is the way this same chapter gradually transforms itself, becoming a musing on fragmentation so directly on par with the sparse and unwieldy narrative strategy of the text as a whole that I had to put the book down and sit for a while to think. Near the end of the chapter, the narrator says of two tapestries that she thought had been destroyed over the years:

“Nothing had been undone, there hasn’t ever been more than this. What I saw, what I can still see when I stand close enough was the idea — the plan — of course! Whoever created these did not remove stitches with the intention, as I had initially suspected, of beginning again; they’d simply stopped what they were doing. They did not feel obliged to complete the plan and so they did not complete the plan. Just this, these few details showed enough. And they must have really felt that and been quite satisfied with it, because why else would they have put these two dark fragments into such beautiful frames?” (24)

This quote — “these few details showed enough” — becomes the underlying mantra of Bennett’s narrative. It is a book which tells everything by telling nothing; we know what this narrator imagines at her most vulnerable moments, in the bathtub or while avoiding a hooded stranger at night, but nothing about her family, her accomplishments, her appearance, the names of the men or women that she loved.

In this way, Pond becomes a reflection of and a rally cry against the way we communicate with each other. The book is sometimes startling in its bluntness, in that the narrator does not skirt around her feelings but chooses to state them plainly, to stare them in the eyes for a moment or two before moving on to something easier to digest. Near the end of the book, when the narrator sees a hooded figure walking at the end of her driveway at night and imagines him raping her, she says:

“You’re terrified, I thought, and you probably have been all day. What’s all this been about if not panic? What other way is there of describing it? Terrified, absolutely terrified. That made sense, actually, and I felt a bit easier then, realising that. Then it occurred to me that perhaps I’d been terrified for longer than all day, and I had rather mixed feelings about realising that — I wasn’t much keen on the idea that I had been terrified for years, but it seemed possible. Well, I knew it really. I damn well knew it, have known it all along….” (167)

These moments in the book, when the narrator confronts her own terror or her own impatience with people’s’ faults and faux pas, feel like an argument against the shallow, easy to digest emotional narratives that fill blockbuster hits and Facebook feeds. These moments taken together become the documentation of a life that takes up more than 200 pages, rather than a surface depiction in 120 characters.

But, one of the greatest beauties of this book is how difficult it is to pin down. While paragraphs are devoted to complex emotional monologues, the rest of the book is riddled with an absurd amount of mundanity. What are we supposed to make of the pages and pages of descriptions of oranges and pears in wooden bowls on the windowsill? The conversations with roofers on the origins of thatch? The search for a replacement stove knob, or the meditations on bicycling and the hum of insects in the grass in the evening? The cooking, the cutting, the feeding? Aren’t these elements of Pond as distinctive as the moments of revelation? And how is a description of a bowl of pears different, in any way beyond the artfulness of the prose, from an Instagrammed latte?

To find an answer, I return to Lord Byron: “There is pleasure in the pathless woods.” Bennett’s debut novel is indeed pathless, and it is that pathlessness that makes it significant. The purpose of the novel, scholars argue, was to create a psychologically accurate portrayal of human life. It was a genre that rejected the conventions of romance and called for realism in it’s place. And, perhaps more than any novel I’ve read, Bennett hits realism on the head with this text. Pond is a mundane book in the most real sense, a book of tangential dialogues and fear and the inability to communicate. It is neurotic the way we are neurotic, mocking in the ways that we mock; it puts words to the daydreams and imaginings that alter our perception of the world around us. It makes sense that in Pond the narrator spends an extraordinary amount of time thinking about and preparing food, or tidying up, because human beings spend a significant amount of their time contemplating and carrying out those activities. It makes sense that the story is not linear, because we don’t live linear lives.

The true beauty of Claire-Louise Bennett’s new novel lies in its honesty, and its unapologetic portrayal of life. In the second to last chapter, the narrator says: “I knew damn well how easily I could be seen. And why shouldn’t I stand at the window like this? Why shouldn’t I be seen?” (197). Bennett’s protagonist not only asks these questions of herself, but in doing so allows us to ask ourselves the same questions. With Pond, Bennett has forged the way toward a new method of communication, which is rich, complicated, unwieldy, and rooted firmly in the everyday.