One Hundred Nights of Hero by Isabel Greenberg (Little, Brown and Co., 2016)

Before I begin, I should admit that I am absolutely the intended audience for Isabel Greenberg’s latest graphic novel One Hundred Nights of Hero. It is a book which revolves around stories and the women who tell them, and as a poet and long-time reader currently making her living as a children’s librarian, it’s not exactly a wonder that I’d be tickled by this book. That being said, I find that the people who enjoy reading book reviews tend to be those similarly pleased by books that valorize story-telling (i.e. writers, librarians, peddlers of books in all shapes and forms). So I’ll begin, then, by saying that this is a book for story-lovers. It’s littered with tale tales, it’s characters are story-tellers. There is (fortunately) just no avoiding it.

One Hundred Nights of Hero takes place in Early Earth, a world which Greenberg developed in her first graphic novel where Wise Old Crones liberally gift magical pebbles to deserving heroes and the best stories come from northern islands where few people roam. This novel moves further south, to the kingdom of Migdal Bavel, and uses A Thousand and One Nights as the premise for its narrative. In Greenberg’s adaptation of the tale, two doofy aristocrats argue about women, which leads one to challenge the other to seduce his wife, who he claims is so chaste she continues to abstains from sex even after marriage. The joke, of course, is on him – it turns out his wife Cherry is in love with her maid, Hero, who spends one hundred nights keeping the suitor at bay with the stories she learned from her mother. 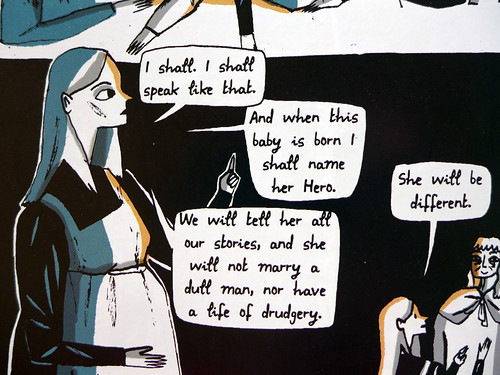 As in A Thousand and One Nights, the majesty of this book lies in the stories that Hero tells, which charm the citizens of the kingdom of Migdal Bavel, and even sway the castle guards in favor of Hero and Cherry’s forbidden love. True to Greenberg’s priorities, the heroes of these tales are always women, often sisters, who are complicated and intelligent and repressed by societal conventions. This is made even more satisfying by the blatant mockery of sexist tropes in fairy tales and classic literature that Greenberg employs, in which there is simultaneously a self-awareness of the book’s potentially problematic influences and a rewriting of these stories that feels fresh and contemporary. Though there is obviously an intentional rewriting and re-purposing of old stories here, what I really admire about Greenberg’s work is the way it creates and exists within its own world. It’s obvious that Greenberg creates these stories because she loves them, and because they mean something – they aren’t tools toward a political end, but proof of the ways in which the political is inextricably entwined with the personal.

I returned to Isabel Greenberg’s work for a number of reasons. I love her sparse, impactful watercolors and the way she uses color to differentiate stories and settings from one another. I love the way she balances the ancient and the contemporary, and the wittiness (and eternal sassiness) of both the narrator and her characters. But more than all that, I love the way these books make room for what is human about us – they are full of characters who make mistakes, who fall in love with moons and hurt their sisters. But the nested, circular nature of her story-telling allows those characters to return and redeem themselves, for history to repeat itself with minor, but essential, adjustments.

I loved falling back into the flawed, troubling, beautiful world that is Early Earth. If you love stories and story-telling, you will too.