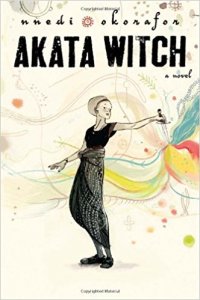 I didn’t realize until I read Nnedi Okorafor’s young adult fantasy book Akata Witch that my experience reading fantasy didn’t just trend toward the western world – it existed solely inside that world. As a child, the books I loved were written by American or British authors, with English speaking, predominantly white characters. They took place in magical pockets of American or European cities – Venice, London, New York – or fantasy worlds that vaguely resembled Medieval Europe. I am embarrassed about this; not because I love and admire these books, but because before I discovered Okorafor’s work, I didn’t even recognize the stark western-ness (read: whiteness) of the genre closest to my heart.

That being said, one of the few perks of realizing that you’ve been reading inside a bubble is discovering of the world outside that bubble. And I couldn’t have had a better introduction to non-western fantasy than Akata Witch. The book follows Sunny, an albino Igbo girl born in America but living in Nigeria, who discovers she has magic powers after she sees a vision in a candle flame. Sunny is immersed in a magical realm which exists at the edges of the ordinary – a world of Leopard People, juju, tainted pepper soup, and wasps that build beautiful sculptures purely for the joy of creating art. This is an incredible world, and one that is distinctly Nigerian; at moments I wished that Okorafor would slow down and savor the world that she had built, because it is so vivid. When Okorafor reveals Leopard Knocks, a marketplace and community center not unlike Rowling’s Diagon Alley, I got the same immersive feeling that I did reading the Harry Potter books – like I had entered a limitless, miraculous place that I’d be happy to wander for decades. For me, this is the key to a satisfying fantasy novel, and Okorafor did not disappoint. Alongside a fast-paced plot is a world worth savoring – the book moves continually through a setting which Okorafor is steadily revealing, which makes each twist in the plot feel even more startling and magical.

I think it’s easy to assume that in the creation of fantasy worlds, the origin of the author is insignificant. They are, after all, creating a brand new world, one that may resemble something familiar and may be entirely a construction of their own. But these worlds aren’t built inside vacuums, and I think it’s easy to ignore the prevalence of western myths and religious tropes in fantasy without ever considering the possibility that fantasy worlds can be constructed around the myths of other cultures. Here, Okorafor succeeds again – the spirit langauge of her world is Nsibidi, a real symbolic language that originated in south-western Nigeria and dates back as early as 400 CE and was used primarily by the Ekpe leopard secret society, an active group in the early 20th century that practiced cannibalism and which Okorafor attempts to reclaim, if only in name, in Akata Witch. It’s relevant, too, that the powerful beings the children call from the spirit world in the novel are called masquerades – named after an Igbo celebration meant to honor the dead and celebrate planting seasons – and that the children have spirit faces which play on traditional African tribal masks. Though the world is entirely Okorafor’s, it exists within a space which honors and seeks to represent the traditions of her Igbo heritage. There is cultural representation here, even if the premise of the book is entirely fantastical.

I was captivated by the world that Nnedi Okorafor created in Akata Witch, and I can’t wait for the sequel, Akata Warrior, forthcoming this fall. But more than that, I am captivated by the door that Okorafor opened when she wrote a book which pushes the boundaries of American fantasy beyond its western borders. I think what fantasy does most beautifully is give us the opportunity to explore the myths that back our culture, but which we’ve often lost or left behind. In creating a character who straddles many worlds – magical and non-magical, black and white, American and Nigerian – Okorafor reminds us that American culture is as diverse and multi-faceted as the people who live here, and that our genre-fiction can and should represent that diversity.