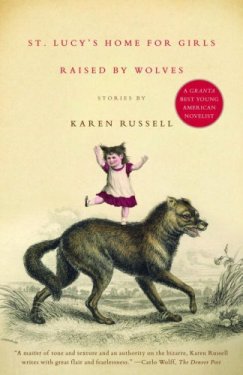 In an interview for The Missouri Review (2013), fiction author Karen Russell was asked about her life in Florida and how it has influenced several of her works. She replied by referring to a “matter –of– fact strangeness” that her native state seems to possess. The constant flux of peoples from different backgrounds and origins and the dialogue between cultural values and traditions, became –during her childhood and adolescence– a window to a world in which there were things that lacked any reasonable explanation. Russell cites among some of her literary influences Franz Kafka, Gabriel García Márquez, Joy Williams, and George Saunders, authors who wove facts from their unique realities with extraordinary happenings. Her experience growing up in South Florida, as well as the impact her readings had on her as a child and adolescent, have translated into the creation of a unique landscape and of the characters that we find in several of her works, including her novel Swamplandia (2011); her collection Vampires in the Lemon Grove (2013); and Russell’s debut story collection, St. Lucy’s Home for Girls Raised by Wolves, written while completing her MFA at Columbia University.

St. Lucy’s Home for Girls Raised by Wolves contains ten haunting and magnificent stories in which the protagonists are adolescents –“deranged adolescents,” as the author calls them– who experience bizarre circumstances. These are not the common occurrences we find in fantasy books, but situations intrinsically connected to the land they grew out of: the heat and humidity, the swamps, the boatyards, and in the background, ocean water and sand. But what I find most striking about the characters in the stories is their indifferent attitude towards these happenings, as if they were a part of normal life. Instead they are genuinely concerned with personal matters –fitting in, being loved, grief, and parents’ divorce. As teenagers, they struggle with the physical and emotional challenges of adolescence, but also with the lack of true role models in their lives. These children live in a different world, one based in a slanted reality where fact and possibility share a common space and where they get to explore and experiment in their own way.

In general, the characters’ lives are like those of any other teenager with school and homework and friendships, as well as with the exploration of uncharted territories connected to love, sexual arousal, and moral values. Thus, in “The City of Shells” a girl called Big Red visits a park full of giant shells during a school trip. But even though the shells are the main attraction, “much more excitement was generated by the Giant-Conch sea-salt shakers than by the shells themselves”. Something similar happens to brothers Wallow and Timothy in “Haunting Olivia.” They find a pair of magic goggles while playing at the beach and begin to see the ghosts of creatures that lived under water: “There are ghosts fish swimming all around me. My hands pass right through their flat bodies.” But this situation becomes irrelevant as the boys come to terms with tragedy, as well as with the possibility of really finding what they are really looking for. The last story in the book, “St. Lucy’s Home for Girls Raised by Wolves,” constitutes an exploration into the awkwardness of teenage years, becoming independent, and finding a place in a world that does not seem open to difference. The narrative takes a profound look at topics like assimilation and submission that transcend the landscapes in the book and can be interpreted according to our present reality. But it also speaks about language and how it can be used to exert power, to distort, and to coerce.

Russell’s masterful exploration of the fantastical in St. Lucy’s Home for Girls Raised by Wolves reminds me of Argentinian Julio Cortázar’s comments about the fantastic as a literary genre. He claimed the fantastic “is everything that helps to expose more clearly and more powerfully the reality that surrounds us.” At the same time, he criticized the kind of fantasy that “that spins around itself and only itself, where you feel that the writer is creating a work of only fantasy and imagination.” Although he was particularly referring to Latin America, his reflections can still be applied to Russell’s work, in the sense that she does not cover up or evade the mundane, but finds ways to peel back the layers and show the readers what lies at the core, even if it means exposing something that will disrupt her/his perception. In St. Lucy’s Home for Girls Raised by Wolves we are astounded by the bizarre array of characters and situations in each story, but at the same time we can recognize a familiar imaginary –places, people, emotions– that encompasses human experience and that draws the reader into a sort of tridimensional space where anything can happen and nothing is what it seems to be.