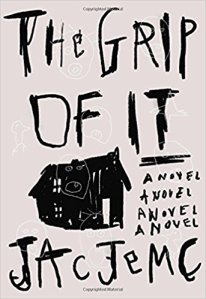 An old chain spools around a metal pulley next to a swinging kitchen door. The silver chain comes up from somewhere under the wooden living room floor and returns to the same place. When I pull it, it gives a little. On the pulley, three words circle, raised in the brown metal: Closed, Open, and Check. And there is a dial, a hefty metal switch that only moves a centimeter. Other than the give, nothing happens. It’s neat and old and mysteriously low to the ground next to the built-in hutch. An examination of the basement where the chain ends and begins again reveals nothing.

This chain is just one of those objects humans wonder about when they find them after they have moved houses, as I have just done.

So little human activity is as jarring as moving. The whole enterprise is an act in suspended belief, a prolonged dousing of disorientation that starts at the door:

Maybe we move in and we don’t hear the intonation for a few days. Maybe we hear it as soon as we unlock the door….“You don’t hear it? It’s like a mouth harp.”

So begins Jac Jemc’s terrifying novel The Grip of It, a novel one doesn’t so much as read as one orienteers.

Through Jemc’s alternating first-person narratives we learn that protagonists Julie and James Khoury are aware of haunted house clichés. They are as prepared as humans can be for residential eccentricities. They are risk-takers, to boot. Julie starts their romance by finding James on Craigslist. James turns out to be a gambler who bets away a good deal of money before they both feel that they need a fresh start in a different home, away from the city. So they have a past that ushers in enough tension to get the ball rolling. But they are rational and proactive in confronting their problems. So, what could shake them to their core? Jemc introduces us to The Grip of It with a small treatise on doubt by Wittenstein:

Doubt is testimony to the elevation of the human, in the philosopher’s eyes. Jemc’s protagonists have practiced self-confidence for years. They are indeed enchanted by the creepiness of their new house. Now it is time for them to experience doubt so pervasive that it manages to shift perception, and therefore, reality. They will have to see what they can live with. Every encounter insists on keeping its secrets. Behold just a taste:

Water Damage:  The stain has pulled itself wider…. The spot seems to inhale a little, lungs expanding.  Bruises: I trace my hand along the wall. I touch something wet and soft. It reminds me of rotten-apple flesh. I think of Julie’s bruise. I run my hands back. I try to find the spot, but I can’t. Impossible Architecture: There’s a room behind that wall, but it’s gone now. Sea Cave: I duck into the grotto….  I can see writings and drawings on the wall. I cannot make any of it out….  I take a seat inside the lip of the cave. I lean against the rock. I close my eyes. I wait for an idea. When I open my eyes again, I am dozing in my rocking chair…. Strange Neighbors: …I see a couple of children, arranged high in the branches…

Humans have the ability to provide rational explanations for almost every creepy detail in the world. But when they dismiss the paranormal, they have only their collective imaginations to consult. And they only have each other to blame for the odd things they have been seeing and feeling on their “uncharted” property. In The Grip of It, Julie and James take parallel heroes’ journeys in the vein of Joseph Campbell, examining their own motives along with the changes they see in themselves along the path. “The Grip of It” first takes hold when Julie puts her hands in the ground. So begins her Call to Adventure:

“I begin to work my fingers into the earth, get my hands buried deep enough that my wrists feel the cool soil, and let them stay there….and the first thing I think when I see them [again] is that these aren’t my hands.”

Julie begins to bruise, and James records the shadows on film. Together, they enter a universe where they find it necessary to search for answers in a found diary, in the local library, on Google, and in religion. They look for communication from shadow and dream. They suffer the inquiries of a “rational society”. They search themselves for their wrongdoings. They list out their sins. But when they present the lists to each other as part of a confessional, the language is not one they recognize, though James insists he can read it:

James and I are living in a Latin mass, memorizing ritual, reciting mysteries we’ve given up on deciphering, foreign syllables unrolling in order.

It’s interesting to think of how haunted house narratives rely so heavily on the premise that the houses themselves atone for the heinous sins of their former inhabitants, or the ghosts who haunt these houses are paying a penance that the living witness. But in Jac Jemc’s The Grip of It, we are dealing with a compound menace. In this wonderful novel, what’s organic is most perilous. It’s the Khoury’s retreat into each other that matters most. Heavy with their own sin and the decaying sins of the former residents, they can no longer negotiate the real world. They stay at home, disorienteering.