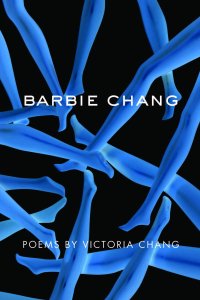 Contributing editor Leonora Simonovis interviews poet Victoria Chang about her fourth collection of poems, BARBIE CHANG, out from Copper Canyon Press in 2017. They discuss resistance, the idea of being and representing otherness, the playfulness of poetry, and Chang’s forthcoming collection, which features short obituary poems written after the death of her mother.

LS: How has your writing changed over the last 5 years? Are there any specific themes that call to you at the moment? If so, how do they connect to the current political atmosphere in the US?

VC: I think my writing has changed a lot in terms of the form and how I write. I’ve been trying to do new things and I’ve grown as a person and gone through a lot of challenges over the last 10 years or so. That shows up in my work, especially in relation to my family. And then the political environment has been stressful. Recently, Zyzzva asked me to write a poem on resistance, so I wrote a couple of poems for them; and then I also wrote a poem in the form of an obituary about the Parkland shooting for terrain.org’s Letters to America series. So I feel like writing about these themes is my own desire, but other people have been asking me to write about them too. It’s part of our culture.

I always like to try new things and never want to write the same poem and that’s my own personal drive, to never do the same thing twice. I feel like women, writers of color, and other marginalized communities have to work harder and we need to do things that are even more innovative, even more interesting, and really try to push. I don’t know if this is true for everyone, but it’s how I feel. And it works with my always wanting to try new things and to really learn and grow as a writer.

LS: You have commented in a couple of interviews how for you, writing poems becomes a playful act. In this sense choosing a doll as the poetic persona seems fitting. At the same time, Barbie has established beauty standards for girls worldwide (not just in the US) in relation to body shape, race, and the role of women in society. I really enjoyed the book plays with these themes, especially at the end when Barbie Chang,

Would it be possible to say the poems in Barbie Chang are, in some ways, proposing an alternative imaginary that disrupts the dominant narratives?

VC: Absolutely. I think growing up as an “other” and living as an “other” you always know –and have known ever since you were a child– that there are other ways of being, other ways of looking, of thinking. It never crossed my mind that there was only one way to be. But everywhere you look, this is what is being shown on television, in ads. It’s what’s being published in literary journals or in books, what companies look like. Everywhere you look this is the one way that exists, but as a person of color and a woman you always know, intuitively, that there’s another way because you are the other way. You just don’t know why you don’t have a voice and why you don’t see the literary world or the greater culture representing you in any way. So it’s very strange to me when people now tell me “I missed that” or “We had our blinders on.” The whole Barbie Chang book just came out of all these feelings. There’s no other, because people like you and me are invisible, it’s like we don’t even exist. There’s no erasure because we never existed. This book was an exploration of this false ideal that’s been shoved onto our culture for so long.  And even though for me there has always been multiplicity, for some people this is a new idea and they still resist it.

LS: I’m curious about Mr. Darcy’s presence in the book. He is not only a canonical literary character, but also represents a dark version of Ken/Prince Charming,

one that has a loop

and describing his hands as :

just a hand that only knows one

We always talk about how the media influences our perceptions and beliefs, but do you think that the canonical authors we read in school from an early age have also informed our expectations of love, relationships, and identity?

VC: Absolutely. The Mr. Darcy poems started as first person poems with real people. And then I decided that probably wasn’t a good idea because then the people would know who they were. Some of the names are kind of unusual. So I decided to change them all to Mr. Darcy and it became much more, because it represented this idealized male who’s white and from the canon, and it speaks about desire and desire of the other in a culture that’s not dominated by the speaker’s ethnicity or gender. I think about this sometimes even with own my kids. I wonder what kind of person they will find attractive because I think they don’t see their own kind as beautiful.

We’ve been reading the same stuff for so long and it’s not to say there aren’t poems that are amazing, but let’s bring in some new stuff. I mean, how many voices were erased because their books weren’t published? How many generations? I always think our generation –generation X- was probably the first where people of color had a space at the table. But it’s not enough because we were barely invited. We were at the kids’ table. And now the new generation is demanding not just to be at the table but that there should be no table. I love it.

LS: One of the recurring physical images in the poems is that of the “lung.” In Chinese medicine, the lungs are associated with emotions like grief and sadness, which in turn, create a sense of alienation. This makes sense considering that the book also delves into Barbie Chang’s mother’s death. Was this concept part of your process for writing the book? In addition, the lungs establish a boundary between the inner organs and the outer environment. How do you see this play out in the book?

VC: I think the lungs are hugely important because they give us life. I’ve been really intrigued by the lungs for a long time because my mom had a lung disease. I did a lot of research on the lungs, looked into the lungs, thought about them. I had no idea how they work, or what happens to them when you have a lung disease. I learned so many things, especially when I had to go to the doctor’s appointments with my mom. She had so much trouble breathing for the last eight or ten years that she lived, that it got me thinking how we’re so lucky to be able to breath, we don’t even think about it. For someone who’s gradually suffocating to actually just take off a sweater is debilitating. All these things that happened to my mom appear in the book a little bit because she was dying as I was writing it.

LS: There are 2 sections in the book addressed to “Dear P,” the middle section of the book and the final section. In the latter there are some powerful lines that feel as warning, but also as a life lesson on love, pain, grief and the interplay of our own shadows with those of the people we love and care about. I particularly felt drawn to these lines, “love is the only thing that is not an   argument.” And, “until you        see that          every  woman        begins   and ends        with another            woman.”        Can you speak about these lines in particular and about the last part of the book in general?

VC: I wrote the “Dear P.” poems in the middle when I had our first child who’s now almost 12. These are old poems from a manuscript I never published. I pilfered those poems and when I put them in the middle it didn’t feel like I was done. So I just wrote the “Dear P.” poems at the end, but felt like they needed to be different. I broke the lines and put in spaces and caesuras. My kids were older and my mom was soon to die, so these poems explored my awareness of my own mortality and how my children would feel when I die. I wanted to write these notes of advice to them and suddenly they became notes of advice to all children. When I was writing these I was thinking about all the college kids I might tell these to, like “don’t worry” or “don’t follow everybody else” and basically “don’t worry about these kinds of women you’re going to meet in your life because you’re going to meet them.” I just wanted to tell them what I’d learned going through my own experiences. I also wanted the poems to be very lyrical because the rest of the book was less emotional. I’m thinking about it backwards though, not sure if I thought about it consciously, but I think I intuitively knew what I wanted to do.

LS: Are the any particular authors you’ve read recently that you recommend to our readers?

VC: I’ve read so many books lately because I’m on the National Critics Circle Board and I’m also jurying for the LA Times poetry prize. One book I really liked was Natalie Eilbert’s Indictus, published by Noemi Press. It really floored me with its language, the thinking, and the intensity. I liked it so much I wrote a review for it. And also really enjoyed Marcelo Castillo Hernandez’s Cenzontle, published by BOA. It’s a really well done first book and it’s beautifully written. I’d recommend anything by Carl Phillips, who is a great chiseler of language, and Analicia Sotelo’s Virgin, also a first book. Finally, Ted Kooser’s New and Selected poems.

LS: I understand your next project involves working with obituary poems. Anything you can share with us about it?

VC: They are these long and skinny obituaries. I was listening to a documentary on NPR about the obituary and became really interested in it.  I thought “I could write these poems now.” I didn’t want to write about her, but I sat down over a two-week period and wrote seventy-five poems: “I die, music dies, appetite dies, secrets die, approval, memory, tears.” They’re just these little obituaries for all these things that die because everything dies when your mom dies. They’re prose poems and there’s no sound play necessarily. Ilya Kaminsky, who has read them a few times, calls them lyrical essays, so I think they’re a little bit more like that. 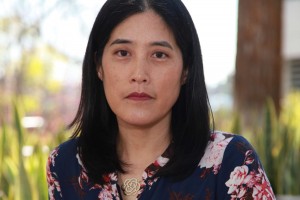 Writer and editor Victoria Chang earned a BA in Asian studies from the University of Michigan, an MA in Asian studies from Harvard University, an MBA from Stanford University, and an MFA from the Warren Wilson MFA Program for Writers. Her collections of poetry include Circle (2005), winner of the Crab Orchard Review Award Series in Poetry; Salvinia Molesta (2008); The Boss (2013); and Barbie Chang (2017). Her poems have been published in the Kenyon Review, Poetry, the Threepenny Review, and Best American Poetry 2005. In 2017, she was awarded a Guggenheim Fellowship.