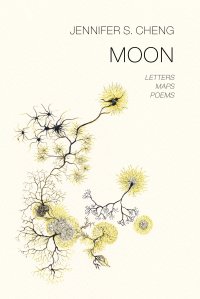 At a poetry reading in September at a planetarium on the Amherst College campus, Dorothea Lasky and Alex Dimitrov talked about astrology – in particular, they talked about moons. Our individual moons: closer to us than other planets and yet too far to ever touch, milky and always changing their shape to match the rhythm of months,. Moons in Scorpio, Aries, Leo, Capricorn. Our moons, they told us, are where our poetry comes from. They were sure of this. Lasky and Dimitrov are not the only poets interested in moons – their meaning, mythology, and landscape. Jennifer S. Cheng, the author of Moon: Maps, Letters, Poems spends the entirety of her latest collection contemplating the moon. Cheng’s book is a hybrid work, and in this way models itself after the moons ever-shifting cycle of light and shadow. Cheng’s primary interest, however, is not just in the moon and its features, but in Chinese moon mythologies which unsettle our idea of knowledge, myth, history, and personal experience. In this way, the book is as cyclical as its inspiration, dismantling narrative and poetry in order to rebuild again and again and again.

Moon is built on iterations. Early in the text, Cheng introduced Chang’E, the Lady in the Moon, who returns over and over again as a central figure of feminist myth, mistake, grief, and love. In this beginning section, Cheng makes it clear that she is talking about the captivity of women, through tellings of Cheng’E’s story. She writes:

“There is, depending on the story, her motive to spare the world of a man who should not live forever, or there is her naivete, her childish impatience, or sometimes an accident. She is fleeing or she is floating. In the story of the Lady in the Moon, there is only one ending: to live out her nights as a captive, over and over, as if in some necessary penance…”

The penance of women plays a central role in this collection, which seeks to unbuild the idea that love and grief and power are unacceptable in the lives of women, both real and mythic. In this way, Cheng seems to seek out a new mythology of the feminine, using the moon as a central figure because of her association with womanhood and feminity, and also because the myth itself is open for dozens of interpretations which highlight the global female experience. For instance, in a section titled “Goddess Tin Hau,” Cheng writes:

In this short passage on grief and war, Cheng makes it clear that the structures left for women – their homes, their bodies, their isolation – are both traditional and unsatisfactory. There should be more; more avenues for grief, more space for comfort or growth, more for women than the purely physical and domestic.

Cheng writes into these spaces of absence, of lack, as of a moon, waning. In “Arrivals” we find, “An absence: when I / was an infant by mother / told me I was born falling / from the sky…” and only a page later in “Myth Making-(I),” “Let us say I reached / around my back & could feel / the place where something had been / severed. I would always / try to name it.” There are love letters, but many of them are love letters to the body, to the self, encouragement to keep reaching, to grow. We feel this in the last section of the book, in which Chang’E speaks. She says,

It is impossible not to be moved by the tenderness in these lines and dozens of others, which speak toward the possibility of love despite all obstacles – love for others, for the world, but particularly for the self, which feels like movement in the dark toward an unfamiliar or too familiar being, something loveable because it is hard to pin down.

I feel that the true value of this collection lies in its tenderness, and the way it advocates for a new kind of narrative built on the idea of the soft, the flexible, a waxing and waning, rebuildable story. It is book of fragile stories and fragile characters which come together in strength. In my favorite lines of the collection, Chang’E says:

“I walk across meters of shattered and crushed shells, balancing across hard stones where I can, to avoid breaking life.”

I love this volume for its hybridity, the way it plays with myth, story, narrative, ways of knowing. But I love it most for its gentle humanitarianism, the way it envelops you as a mother might, with grace and strength and warmth, gently. I have read it many times, and will read it many more.