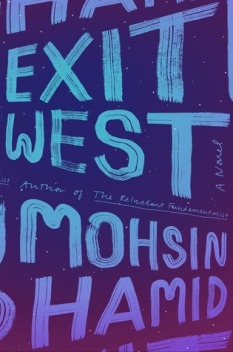 Exit West by Mohsin Hamid is about magic portals. It’s about immigration. It’s about distance. But mostly, it’s about love.

Exit West’s protagonists, Saeed and Nadia, find each other in an unnamed Middle Eastern country. Just as their relationship begins to bloom, their country (and the whole world, too) is plunged into chaos. A series of miraculous doors appear, offering the opportunity to pass through and enter a faraway corner of the globe. Cross through one of these portals in Manila and you might land in Munich; walk across one in Nigeria and you could end up in the Netherlands. Saeed and Nadia take a chance and cross through the threshold. But that first door is not the only border they must pass, and so they begin to crisscross the globe in perennial pursuit for something better. Their journey is circuitous. It is defined by xenophobia, alienation, and hardship. Saeed and Nadia suffer unimaginable strife under unimaginable circumstances. But here’s the remarkable thing: Exit West isn’t obscure or inaccessible. Not at all. Saeed and Nadia’s narrative is unmistakably universal.

Let’s back up for a second, though.

Stylistically, Exit West is an easygoing gem. The book is very readable, edging itself close to beauty but never stepping off into the purple prose abyss. The New York Times’ Michiko Kakutani called Hamid’s writing, “spare” and “crystalline”. I think this is accurate, but I’d add, “devastating,” due to the brutal honesty with which Hamid pens this novel. Consider this flexible sentence in which a fissure in Saeed and Nadia’s relationship begins to appear:

“It seemed to Nadia that the further they moved from the city of their birth, through space and through time, the more he sought to strengthen his connection to it, tying ropes to the air of an era that for her was unambiguously gone.” (187)

So Hamid’s prose is pretty. But even more impressive than the writing itself is the author’s brilliant use of magical realism. Often associated with mid 20th century Latin American Boom writers, magical realism has been used to reflect a version of the world that feels too strange to be true, and yet, unmistakably, too true to be strange. Magical realism seeks to expose what is absurd about the banal and what is banal about the absurd. Though hailing from quite a different context, Mohsin Hamid does precisely that in Exit West.

The land-transcending portals are, of course, a metaphor for mass immigration. In the novel, Saeed and Nadia are two amongst millions who cross through to the Western world (hence the title, Exit West). In perfectly magical realist fashion, though, Hamid never focuses on the details of this fantastic occurrence. There is no conversation about the unreal science of these portals, nor any serious inquiry into their origin; the world just accepts them as fact. Some readers might be inclined to dismiss this as laziness on behalf of the author but, in truth, quite the opposite is true. Hamid does not fret the tangibility of his magical doors because, in our reality, we do just the same when it comes to the mass-migration of peoples across the world. We discuss (and fume over) the consequences of immigration and the influx of foreign persons into our countries but we often fail to really investigate the unfortunate causes of such migration. That is Hamid’s magical realism working. What is normal for us (immigration) is given a supernatural twist (land-transcending portals). Yet it is the banal component that’s considered in the novel, not the absurd. By doing this, Hamid places a mirror in front of the reader, saying, “Do you recognize yourself?”

Exit West is a critique of the callous and naïve manner with which many modern Western nations treat migrants and refugees who come to their countries. But that’s diminutive. Exit West is much more than a critique of xenophobia. It’s an important novel, and it’s important because it de-legitimizes bigotry by way of underlining the quiet similarities we all, as humans, share. Said another way: Exit West’s brilliance lies in its universality. From even the very first sentence, Hamid conveys the ubiquity of this story:

“In a city swollen by refugees but still mostly at peace, or at least not yet openly at war, a young man met a young woman in a classroom and did not speak to her.” (1)

Notice that Hamid does not name the main characters in this first sentence. This is intentional; it lends the novel a sense of the commonness of this story from the beginning. A similar trend continues throughout the novel. As the natural order of the world comes tumbling down, Saeed and Nadia hop from country to country and community to community. Along the way, we are witness to the rise and gradual fall of their relationship. Incredibly, that is the true arc of this novel––their love. Hamid tells us the story of global revolution from within the confines of a human relationship. Why? Hamid is telling the reader that, at the end of the day, the human experience can be diluted to a few main themes: discovery, love, and loss. Sure, Saeed and Nadia struggle on their journey and are victims of all sorts of bigotry. In reality, though, the novel is mostly about the slow dissolution of their relationship. It’s a simple love story wrapped in a cataclysmic socio-political epic. In this way Exit West is simultaneously enormous and miniature. It is the story of magical portals but it is also the story of two young people falling in and out of love. It is the story of the world on the brink of disaster but it is also the story of how us humans are capable of benevolence in even the most trying circumstances.

So why should you read Exit West? What makes the novel fascinating is its careful exploration of human migration at its most visceral. But what makes the novel necessary is its insistence on grounding the reader in what is most common at the heart of the human experience, despite the chaos. Exit West forces the reader to focus on normalcy amidst absurdity, thereby bringing what is truly most important to the forefront: us, and how similar we are to each other. As Hamid says: “We are all migrants through time.” (209)

One thought on “Review: Exit West by Mohsin Hamid”