After way too many years following an academic calendar, I still think of August as a month on the cusp of new beginnings. That’s why today we’re sharing our stories of transformation–of starting over in a new place, a new era of your life, even a new body.

In our books this month, a family of refugees rebuild their lives in a country that is not as magical as they once believed. The world literally pauses, waiting for one child to flip a switch. A woman turns into a wolf. Anything is possible in these books of transformation, which speak to the ways we are constantly changing, starting over, making ourselves new.

British author and psychiatrist Tade Thompson’s stories and shorts have been critically acclaimed worldwide. His debut novel, Rosewater, won both the Nommo Award and the Arthur C. Clarke Award, one of the most prestigious awards in the U.K. Originally published in 2016, the Wormwood trilogy’s first installment is a deep dive into a world of aliens, with a beautiful mix of psychic powers, detective work, and sci-fi at its best.

In Chana Porter’s debut novel, an alien life form known as the Seep doesn’t conquer the planet in a military sense –instead it infiltrates humankind via their drinking water, achieving the “softest invasion” (9) earth (or the sci-fi genre) has ever seen. The effect of this invasion is not what one might expect. Not mind-control or bodily harm, but instead a oneness with the world, the ability to touch objects and feel their past, present, and future. For those under the influence of the Seep, “it was impossible to feel anything except expansive joy, peace, tenderness, and love.” (11) So begins an unconventional take on a classic sci-fi premise, a novel about grief and identity and those hardships of the human condition that persist even in a world where death is an “opt-in procedure” (44) and humanity has been freed to live outside “the old scarcity paradigm.” (13)

Lupe Dávila returns for another summer in Puerto Rico. But once again things are not quiet on the island. Ten months after Hurricane Maria, a category five storm, the island is still struggling to recover. On top of that there are dead people popping up on Vieques, a small island off the northeastern coast of the main island of Puerto Rico. This time Lupe’s Tío, police chief Dávila, knows better than to try and keep Lupe away from the investigation. The first murder claims three Caucasian college boys at the bioluminescent bay. The murder scene is not too far away from construction on a new resort.

Slow burn stories rarely find their place in modern storytelling. It is even rarer when a slow burn has so much thought and detail in its world-building that it warrants dissection of the most minute details. The novel Vagabonds by Hao Jingfang achieves this feat by taking its time revealing Jingfang’s extensive research of physics, economics, and social systems.

An Unkindness of Ghosts by Rivers Solomon (Akashic: New York 2017)

Rivers Solomon’s science-fiction novel An Unkindness of Ghosts is masked in a pain.  The point of writing on the pain of others is to expose the reader to a point of view; in this instance, Solomon writes from the perspective of Aster, who identifies as gender fluid. Aster is searching for a consistent path in the uncertainty of the cosmos.  “She craved clarity, transparency and answers.” (169)  She longs for answers from her mother, who died when she was a baby; yet, a mapping of sorts leads her on a path set by her mother.  Cutting out the contrivances, we see Aster through her history of loss and survival on the vessel Matilda. 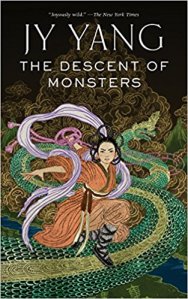 I have never read a book quite like JY Yang’s, The Descent of Monsters, the third novella in their silkpunk Tensorate series. I have read and loved their first two installments, I have read Victorian epistolary novels, I have imbibed mysteries, thrillers, and other assorted noir, but never something that so successfully wove all these disparate DNAs together. END_OF_DOCUMENT_TOKEN_TO_BE_REPLACED